On Tuesday the 31st I made a trip up to the Perkins school for the blind in Watertown to meet with a couple of the staff there and show them the BecDot, a braille educational toy I am developing to help provide access to blind and visually impaired people ( more on the device here ).  It was our second trip to the school in less than a week, the previous visit was for an assessment of Becca’s visual acuity at the low vision clinic that is located at the school, unfortunately the assessment did not go as we had hoped and Becca was scoring a 20/190+ on the visual acuity scale and her peripheral vision was also really starting to degrade.  The news was a bit of a blow to the psyche and pulling up to the school on this Tuesday needless to say I had mixed emotions.  I was excited to demonstrate the device and get the feedback that I needed but at the same time reflecting on the reason why I was there in the first place took a bit of the wind out of my sails.

But of course I was there for a reason and the reason was to learn from the experts that may eventually use the device to educate children who currently need it or could need braille in the future.  I learned while developing products that the most successful products are the ones that are designed based on influence from the people who will use it.  Success to me with the BecDot is making a device that helps people in some capacity, it may be that the device itself will help people directly or it may be that someone sees it and creates something based on it or the idea behind it.  That idea being to create low cost devices that provide access and inclusion.  None of that however could be realized without influence from the experts.  I admittedly  have no idea what I am doing when it comes to teaching braille but what I do know is that I saw a problem with access to braille teaching devices and the impact that this had with access later in life and I felt the need to change that.  Another important lesson I learned in trying to promote change is that you need to jump into things feet first even if you have no idea what you are doing, push through the obstacles, prove the naysayers wrong and once you have made a big enough disruption you finally solicit feedback.  The idea is that if the disruption is big enough, even though the feedback will undoubtedly change the direction, the underlying concept will in more cases than not remain.  The key is to allow the process to happen…

You first disrupt, you ask for forgiveness in the form of feedback, you iterate on that feedback and finally you perfect. 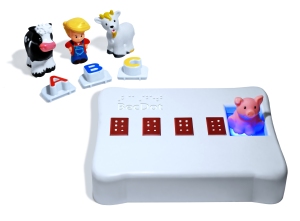 So this is where I am at with the BecDot I am proving to myself and others that a low cost braille educational tool is possible.  Even still I have little knowledge of braille other than the alphabet Im not even sure what the rules of braille are and not even close to knowing how to teach it.  So I am humbly walking into this room full of experts asking for their help and as I sit down with the staff who were very inviting I got the sense that something was a bit off.  I quickly realized that the device was not up to par so I explained why I was there and it was to be certain that I was getting feedback from the experts so that I could make a device work for them.  At that point one of the team asked me about a video I shared with them earlier specifically asking who the little girl was in the video and if she was the one learning braille, when I told her no she let out a “thank god”…  “That is not how braille works” she said.  In the video Reagan our eight year old was tracing the dots with her fingers and the staff member explained that you need to make one fluid movement across the dots.  At this point the feedback started flowing and I learned that two of the members of the staff literally wrote the book on how to teach braille, I was exactly where I needed to be!!  The book BTW is titled Getting Ready for Braille which is about teaching pre braille literacy.  What an opportunity I had in front of me these folks were so gracious to allow me to come into their school and show them something I created but had no idea what I was talking about and they were willing to help me perfect it, I could not have asked for a better discussion that day.

So although I walked in with very little knowledge of braille or how to teach it I walked out with valuable feedback and contacts that will be very important as I continue to push this forward.  I also left energized by a couple of comments at the meeting specifically when one of the staff from the school said “we need something like this”.  The other was from one of the staff who explained that a device like this has a secondary benefit and that is it entices children with normal vision to talk to a blind child because they have a “cool toy” to play with.  As she explained this secondary benefit (which deep down is a big reason why I am doing this, that is to ensure that Rebecca is always included) I had to fight back the tears a bit welling up because she articulated one of my biggest fears for Rebecca, a world of isolation.  Too many blind and visually impaired people live in isolation and I want to do everything I can to ensure that this device and our efforts in creating it help to change that reality.  This is my way of adapting the world.